Daily News – Originally published on October 25, 2006 By J.R. TAYLOR
Love is the Drug 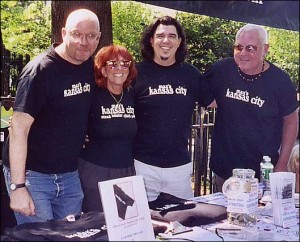 It’s her 61st birthday, and Yvonne Sewall-Ruskin is in the lobby of the W Hotel on Park Ave South at 17th St. – next to the former site of nightspot Max’s Kansas City. She’s recalling the first time she stood outside the building.

“I was going in for a job interview as a waitress,” she says. “I really needed the job, and was practicing what I was going to talk about in the interview. I was looking at the Max’s sign and thinking that I didn’t have a clue what chickpeas are.”

That modest proclamation of “Steak-Lobster-Chick Peas” neatly summed up Max’s role in merging ’60s ideals and ’70s excess. The restaurant and nightclub is a legend in both the music and arts scenes, partly due to Andy Warhol’s adopting it as the local hangout for his Factory menagerie. It became a hipster mecca for politicians, Hollywood types and rising stars in all the arts.

The original Max’s would close at the end of 1974. By then, steak and lobster and chickpeas was overshadowed by sex and drugs and rock ‘n’ roll. Sewall-Ruskin would be at the heart of most of it. She not only got the waitressing gig, but became the longtime companion of Max’s owner Mickey Ruskin.
Today, Sewall-Ruskin is the walking legacy of Max’s Kansas City – and she’s as surprised as anyone by what she’s done with the notorious name.

“I thought I’d be retired in Europe right now,” she says. “I’d sold the New York City loft where I’d lived for 22 years, and had gone off to live there when, long story short, I discovered that I had a crooked investment banker. I suddenly went from being well off to finding myself on the verge of being homeless. Just when I came back to New York to deal with all that, I was told by my attorney that, after six years of dispute, the Max’s Kansas City trademark was mine.”

Most women in her position would’ve gladly cashed in on some licensing opportunities. The recently shuttered CBGB pulls in millions through similar deals. Sewall-Ruskin, however, recognized that the Max’s name could signify more than a financial windfall.

The Max’s Kansas City Project is a nonprofit that sounds like an inherent contradiction. Based out of a Manhattan loft and Sewall-Ruskin’s home in Woodstock, the foundation seeks to educate youth about the dangers of drug use, while providing financial support to a veteran arts community that once thrived on living only for today.

Sewall-Ruskin, however, is quick to note that Max’s hedonistic scene was always inspired by Mickey Ruskin’s generosity. “Mickey was really a philanthropist,” she says. “He ran a restaurant, but he still put out free food every afternoon. There were a lot of local artists for whom that was the only meal of the day. They were on the way up, but nobody had any money then.”

Sadly, Mickey Ruskin would ultimately get too caught up in the scene – along with certain stars who never rose past the point of addiction. “There were very few people who didn’t have fun at Max’s Kansas City,” says Sewall-Ruskin. “We also lost a lot of people to substance abuse, including the father of my children.
“Mickey didn’t start dabbling in drugs until very late in life. We weren’t together then, but we were still close. He was 50 years old when he got some bad Quaaludes. They were the kind that were manufactured in somebody’s home, and they killed him.”

So, now we have Max’s Kansas City as an unlikely beacon for clean living. The nonprofit fosters arts programs and scholarships for high-school students. Sewall-Ruskin’s future plans include a cyber cafe for teens, based out of maxskansascity.org. She envisions a place where recovering celebrities can reach young people with truly unglamorous tales of addiction.

That’s a bold move for a woman who could make a lot of money off an irreverent and anarchic attitude. Instead, she’s comfortable with putting a pall on the most unsavory parts of Max’s history. “There were a lot of perks,” says Sewall-Ruskin, “and we had a great time, but there were also a lot of missed opportunities and a lot of consequences – like my children growing up without a father.”

The Max’s Kansas City Project is equally grounded in its support of the arts. The organization provides established New York State artists with small grants to help them through troubled times. “The most successful artists,” explains Sewall-Ruskin, “can still find themselves sick or injured and unable to work. Even something as simple as flooding can destroy years of work.”

One example is artist Francine Tint, “I’d had some surgery and I live alone,” Tint says. “That makes it hard for an artist like myself who’s essentially a mom-and-pop shop. [Max’s Kansas City] grants go directly to the beneficiary. It could be used for paying the rent or paying for a doctor. I chose the doctor, myself.”

As a veteran of the ’70s art scene, Tint also appreciates the insight that Sewall-Ruskin brings to the foundation: “I learned about art at Max’s Kansas City. It wasn’t just drinking and drugs. There were major figures who were there. … Yvonne’s the perfect person for this kind of project. She knows the ins and outs of that world.”

Today, Sewall-Ruskin finds herself feeling fairly secure. “There’s a profit-making side to the Max’s logo,” she says with a laugh, “but I really feel that I was meant to do what I’m doing now.

“It’s no coincidence that just when I felt humility and fear in my own life, I found myself in a position where I could show empathy,” she adds. “I’ll admit that I was arrogant. I knew someone who’d lost her money to an investment banker. I thought, ‘Who puts their trust in some guy?’ Well, that came back and hit me on the head.”

A “Tribute to the 30th Anniversary of Punk Rock” benefiting the Max’s Kansas City Project will be held at the Gibson/Baldwin Showrooms, 421 W. 54th St., on Dec. 14. For details, e-mail info@maxskansascity.org.